The data from the past two centuries show that the length of life highly correlates with the country’s GNP or per capita income. Hence, the higher the income the longer the life expectancy.

There are two major groups of risks factors that influence health quality and potentially reduce life expectancy and quality. The first group consists of ‘external’ threats including infectious diseases, natural disasters, and environmental impact. While the second group contains human activity related to both ‘traditional’ and ‘modern’ risks. Following the impact of major risk factors on the expected lifetime throughout the years an important change must be noted1. 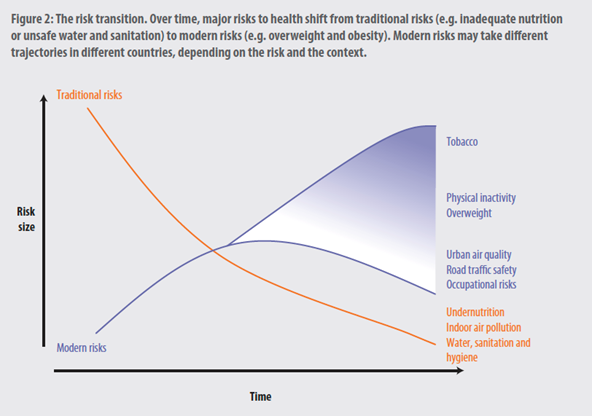 In the past, the predominant risk factors influencing health, thus the longevity and the quality of life, as well as the economics of the health care systems were malnutrition, indoor air pollution, water quality, sanitation and hygiene. For the past 50-60 years, most of the driving factors have been replaced by behavioural risks including: excessive drinking, tobacco smoking, physical inactivity resulting in obesity. These emerging risk factors are currently responsible for the development of a vast majority of NCDs (non-communicable diseases) and premature mortality.

In total, the non-communicable diseases take 40 million lives each year, with cardiovascular diseases -17,9 million, cancers – 9,3 million, respiratory diseases – 4,1 million and several others to follow2. In response to that, a strategy of Sustainable Development Goal 3,4 of the United Nations has been established. It aims at reducing premature mortality due to the non-communicable diseases by one-third. The strategy of the Goal 3,4 focuses on six factors, including reduction of tobacco smoking, which poses one of the most significant burdens to public health.

Tobacco smoking is the biggest behavioural risk factor for the development of chronic diseases in the world and it is responsible for several serious, potentially lethal, conditions, including cancer, cardio-vascular and chronic respiratory diseases. Comparison of the health risk of smoking and the risk of infectious diseases (outside the time of the pandemics) revealed that smoking causes nine times more deaths than all infections3. Effects of tobacco smoking, including exposure to second-hand smoke account for 7,2 million deaths annually and this number is projected to increase markedly over the coming years. 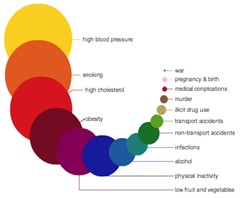 Quitting tobacco is the only way to limit the health damages it causes. Ultimately, leading to a smoke-free environment. The primordial prevention, a worldwide and generationwide education are yet to come. This is a very long-lasting projection, however, since as most of public health educational interventions it takes decades to produce expected results. However, other methods are available and must be employed widely in the meantime. 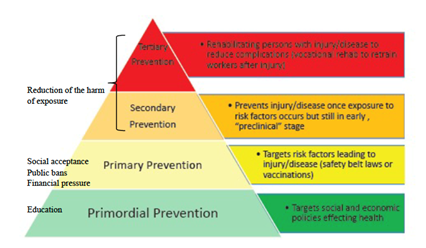 Following is the primary prevention, based on banning cigarettes and putting financial pressure using taxation policy (especially, excise tax regulation). These two strategies target the social acceptance of smoking, they aim at discouraging people to start smoking or at least delay this risk behaviour to older age and encourage those who already smoke to quit. Unfortunately, only 30-40% of smokers are successful in quitting4 but only if they take an attempt. According to Eurobarometer 2020 “More than half (53%) of those who currently smoke have at some point attempted to stop. Most of those attempts took place more than a year ago, with more than one third (38%) answering this. Less than a fifth (15%) have attempted to give up smoking in the last 12 months. Conversely, almost half of current smokers (49%) have never tried to quit smoking”. Therefore, an additional strategy to reduce harmful consequences of smoking addiction is implementation of several available alternative nicotine delivery products. For example, non-combustible ‘Heat-not-Burn’ products are an alternative to traditional cigarettes and are around 100 times less probable to cause cancer5. The most significant difference between “Heat-not-Burn” and traditional cigarettes is that “Heat-not-Burn” heats tobacco up to about 350°C, while tobacco in a regular cigarette is burned at above 600°C. It has long been said that “Heat-not-Burn” does not release smoke containing unhealthy components due to not burning tobacco at high temperatures, and it prevents users from being exposed to high levels of carcinogens and toxic chemicals found in a conventional cigarette such as arsenic, benzene, carbon monoxide, heavy metals, and tobacco-derived nitrosamines. These alternative nicotine products prevent the damage following smoking without necessarily treating addiction to nicotine, which as mentioned previously is a very difficult process, unsuccessful in most cases. 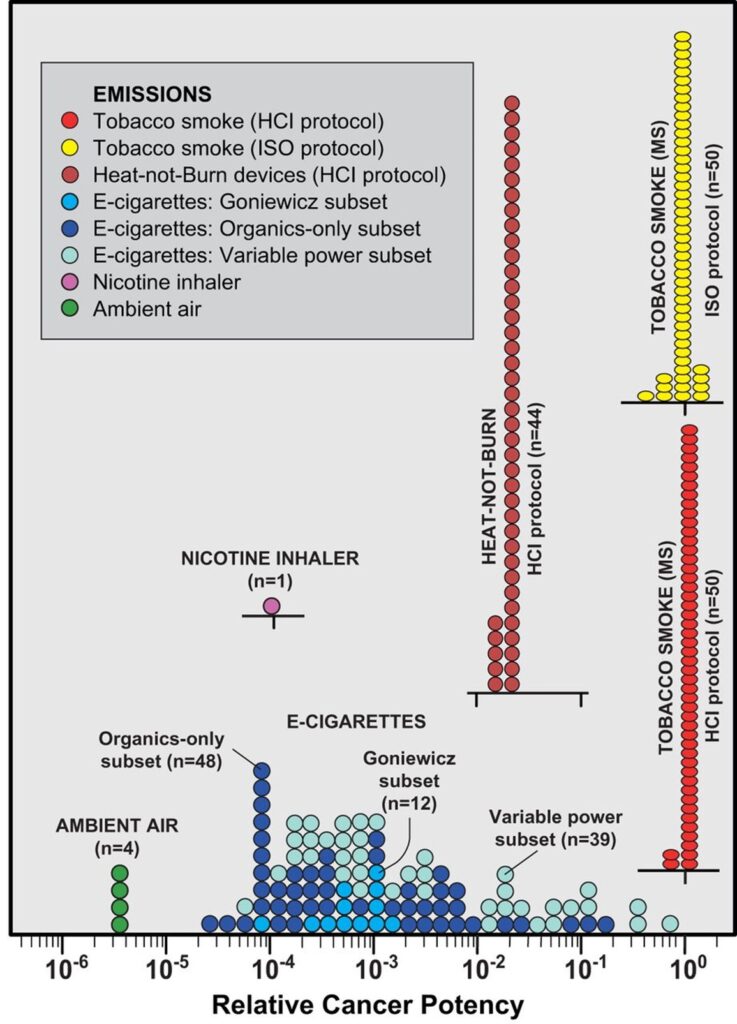 Relative cancer potency modelled for common forms of nicotine delivery. Potency is the aggregate estimated using equations 3 and 4 and normalised to average tobacco smoke with cancer risk set to 1.0 (equation 5). Each circle or ellipse on the graph represents the emission from a single sample or experiment in the peer reviewed literature. In all, emissions from 14 peer-reviewed studies are summarised in the diagram (see text for data sources). MS, mainstream smoke5.

As mentioned before through exacerbating health, thus the longevity and the quality of life, certain risk factors also burden the economics of the health care systems. Therefore, investing in defeating certain risk factors of chronic diseases today will bring a positive economic outcome in the near future. Smoking is estimated to be the third most profitable risk factor to invest in, right after dietary change and binge drinking and it is calculated, that defeating the habit of smoking would bring 8-fold return on investment6. It simply arises from the fact that smoking-related health impairment leads to expenditures from country’s budget, which can be resolved into three major components. The first component is the actual treatment cost of tobacco smoking-related illnesses, and the second component is the indirect costs consequent upon productivity loss, as the disabled cannot work and earn money. These two aspects can be illustrated on an example of COPD (chronic obstructive pulmonary disease) attributable to smoking in 60% of cases. The healthcare cost of COPD in Europe is calculated to be about 23 billion euro per year, with additional indirect total costs of about 25 billion euro per year7. Finally, the third component is measured by monetizing decreased quality of life of those who are ill and are dying early and reaches almost 100 billion euro spent each year. In some regions of the world these costs end up being higher than the revenue governments make of tobacco excise and taxes. Although in some countries, especially those of Central and Eastern Europe the gain is greater than the loss. Taking Poland as an example, an in-depth analysis of the country’s budget revenue from excise tax reveals that the share of excise on tobacco in total excise tax revenue amounts to around 30%. Even though health expenditures and systemic loss in productivity due to the tobacco induced diseases reaches 7 billion PLN every year, the government’s excise and VAT income from tobacco industry amounts to 23 billion PLN annually8. Therefore, the final profit of 16 billion PLN a year leads to a conflict of interests between bigger tax income or better health condition of the nation. 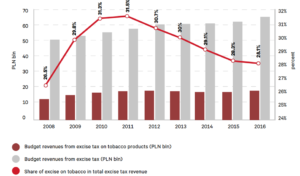 Public health burden of tobacco consumption is predominantly attributable to the use of conventional combustible tobacco products. Investment in helping people to quit their addiction, which is a commonly recognized method in many countries, may not be the best solution, as it is simply not effective9. The governments should be more proactive in trying to seek a harm reduction policy rather than investing in the ‘quitting policy’, as the economical balance is also more profitable when people are directed to switching, not quitting. This statement can be supported by the results of a study conducted in Bulgaria, which measured the public health and economic effects of the switching consumption habits. The general conclusion was as following. In 2019, smoking-related damages incurred by the economy amounted to 3,3-5,7 billion (2,8-4,8% out of the Bulgarian GDP). In a simulated environment switching to non-combustible tobacco products could reduce the expenditures in 2019 to 2,8 billion10. Depending on different scenarios formed during the study this transition may have lowered death and morbidity rate by 48 to 83%.

The first “Heat-not-Burn” tobacco products were introduced in the late 1980s and even though they did not achieve commercial success in that moment, since then tobacco companies have been trying to bring tobacco heating systems with new modified features to the market. Recently, alternative nicotine products have become widely available in most countries. However, due to their innovative nature they lack traditional part of tobacco control policies and sadly in some regions of the world they are banned. Taking into consideration the advantages of harm reduction products, governments should use their financial tools to implement them on a much bigger scale. Although theoretically, in health and economical context equal taxation of all nicotine containing products sounds reasonable, in reality it is shown to be incorrect. A system of excise and taxation that matches actual risk of certain product would be a much better solution. The key is titration of the final prices of both the combustible and non-combustible products to make the less harmful alternatives more appealing for consumers. When operating in taxes, as a method of making conventional cigarettes more expensive and through that less attractive, it is important to do it very carefully, as a marginal taxation increase after which the revenue starts to reduce often leads to an increase in illicit trade. 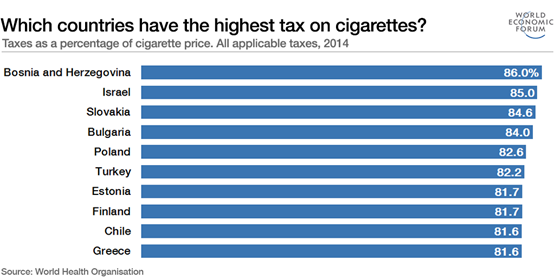 There is a significant lack of research conducted in this field in Europe as most of the currently used data comes from USA and Canada. However, the difference in approach towards alternative tobacco products between Europe and the USA is not only restricted to research. It can also be seen in the way the products are assessed, approved and introduced to the market. All these aspects seem to be neglected and badly organized in Europe, contrary to the USA, where the approach towards alternative tobacco products seems to be much more reasonable. In the USA, the institution authorized for dealing with tobacco products is FDA (Federal Drug Administration). It is responsible for the whole process of introducing new tobacco products to the market, starting with the necessary research and completing it with giving the needed authorization, such as permit to circulate as a tobacco product or permit to circulate as a tobacco product of reduced harm. If a certain product complies with requirements, it can also be granted a reduced exposure or reduced risk claim. Currently, there are two different alternative nicotine products available in the USA, that were granted the claims – IQOS with reduced exposure claim and Snus (sold under the “General” brand name) with reduced risk claim.

The situation in Europe however presents itself differently, as EMA (European Medicines Agency), the central EU regulatory office, focuses only on pharmaceutical products and does not have the authority FDA has. It leads to each European country forming its own tobacco legislation and one of the effects of such solution is ‘the snus paradox’. In October 2019, FDA granted Snus a reduced risk claim of mouth cancer, lung cancer, heart diseases, stroke, emphysema and chronic bronchitis due to epidemiological studies that were conducted in Scandinavia, where Snus is legally sold and frequently used, whereas in most European countries it is banned11.

Therefore, further alterations in legislation, as well as previously mentioned taxation and implementation of local research exploring the area of innovative tobacco products must be implemented to improve public health.